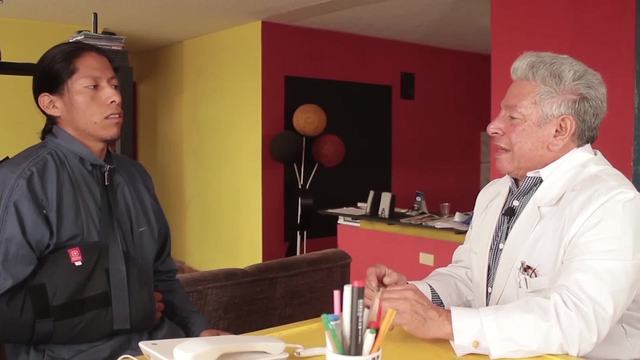 Let's talk about pronouns. In English, when we talk with someone we use the second person singular pronoun ‘you’. In Spanish, we have three different options for that same pronoun: tú, usted and vos. Which one we use depends on things like the relation that we have with the person we are talking to or the place where we are. Generally speaking, we use usted when we want to talk in a more respectful way with someone:

What do you... what do you recommend to me, Doctor?

However, if you are following the Colombian series Los Años Maravillosos, you have probably noticed that people usually use usted even when talking with family members or close friends. Why? That’s just how people speak in Bogota, Colombia:

And what's going on with you, my little boy?

Regardless of its use, there is something quite unique about using usted:  we conjugate usted as we would conjugate él (he) or ella (she):

He works between nine in the morning

Where do you work?

As you can see in the captions above, the conjugation of the verb trabajar (to work) with él (he) and usted (you) is exactly the same (trabaja), something that doesn’t occur with tú and vos:

And don’t forget that this also occurs with the plural form ustedes (you all), which we conjugate as the third person plural pronoun ellos/ellas (they). Notice how ustedes and ellos share the same conjugation of the verb saber (to know) in the following captions:

They know about the places that are reproduction habitats,

That's it for now. If you want to learn more things about the use of tú, usted and vos make sure to check out our series about Tuteo, Ustedeo y Voseo. And don’t forget to send us your feedback and suggestions.

The Spanish word lo can be used as a subject pronoun, an object pronoun or a definite article. We have several lessons on the topic, which you can read by clicking here. Lo is a very useful word, and there're many common phrases that use this particle. Let's study some examples.

The phrase por lo tanto means "as a result" or "therefore"

This leek, I haven't cleaned it previously, therefore, we are going to clean it.

...and I for the time being plan to let the whole family know.

Apparently it was in a perfume shop.

The phrase por lo general is equivalent to the adverb generalmente. It means "generally"

But generally we find alarm systems.

The phrase a lo largo de means "throughout"

at least is changing throughout the seasons.

The sky is cloudy and in the distance you Speaking of what has happened to you.

In fact, you can add the phrase a lo to certain adjetives to talk about the way something is being done or someone is doing something. For example, a lo loco means "like crazy."

I put a bit of paint there like crazy [spontaneously]

Another common example is a lo tonto (like a dumb, in a dumb way, for nothing).

Hazlo bien. No lo hagas a lo tonto.
Do it right. Don't do it foolishly.

¿Para qué esforzarse a lo tonto?
Why go to all that trouble for nothing?

This phrase always uses the neutral singular form of the adjective. Even if you are talking to a girl or a group of people, you will always use the same. For example:

In Mexico, you will also hear the expression al ahí se va (literally, "in a there-it-goes way"). It means to do things without care, plan, or thinking. This is pronounced quite fast, by the way, almost as a single word. Translations vary:

Completé el examen al ahí se va porque no estudié.
I completed the exam with mediocrity because I didn't study.

Finally, there's the expression a la buena [voluntad] de dios (leaving it to God's goodwill). You may find it in phrases involving the idea of entrusting what you do to God, but it's more commonly used to express that something is done rather haphazardly, without care, skill, effort and or plan.

Is there a topic you'd like covered in our lessons? You can send your suggestions to newsletter@yabla.com. 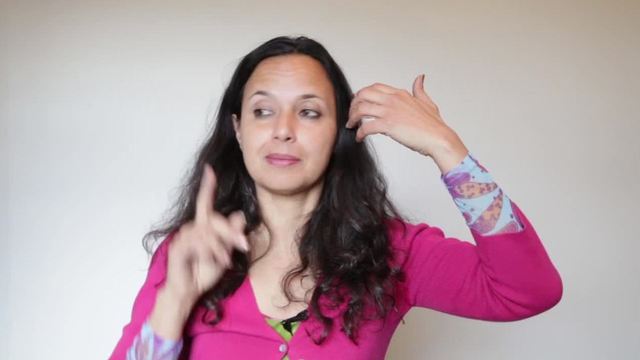 Yo me veo en el espejo.
I look at myself in the mirror.

that can also be transformed into a reflexive verb, peinarse:

Yo me peino
I comb my hair [literally, "I comb myself"]
Caption 20, Lecciones con Carolina - Verbos reflexivos

On the other hand, intransitive verbs are action verbs that, unlike transitive verbs, don't take a direct object receiving the action. Examples are llegar (to arrive), estornudar (to sneeze), morir (to die), caer (to fall), etc. Consequently, these verbs can't really be transformed into reflexive verbs. So why do we always hear Spanish speakers using reflexive pronouns with these verbs? For example:

Si me caigo, me vuelvo a parar.
If I fall, I stand up again.
Caption 8, Sondulo - Que te vaya mal

Obviously, me caigo doesn't mean “I fall myself." It just means "I fall," because the verb caer[se] is part of a group of verbs that use reflexive pronouns but are not reflexive verbs. These verbs are called verbos pronominales, verbs that are typically conjugated using a reflexive pronoun that doesn't have any syntactic function. It's just the way these verbs are typically constructed! Another example is the verb morir (to die). Me muero doesn't mean "I die myself"; it just means "I die." The following example uses it as part of an idiomatic expression:

Now, while reflexive verbs like peinarse always need to be used with reflexive pronouns, verbs like caer (to fall) and matar (to kill) can be used either as pronominales (caerse and morirse), or as simple intransitive verbs (caer, morir), that is, without the reflexive pronouns. Therefore, the following expressions are also correct (though maybe just a little less common in everyday speech):

Si caigo, me vuelvo a parar.
If I fall, I stand up again.

The really tricky aspect of reflexive pronouns is how to use them, either with verbos reflexivos like peinarse or verbos pronominales like caerse and morirse. Typically, you will use the pronoun before the verb, for example me caigo (I fall), te peinas (you comb your hair). But how do you use reflexive pronouns in a sentence that uses more than one verb, for example an auxiliary verb such as the verb ir (to go) combined with a verb in the infinitive?

Juan va a morir
Juan is going to die

Well, the rule is simple. You either use the reflexive pronoun right before the auxiliary verb:

Me voy a caer
I'm going to fall

Juan se va a morir
Juan is going to die

Or you use it after the verb in infinitive as a suffix:

Juan va a morirse
Juan is going to die

And the same rule applies to reflexive verbs like peinarse:

In fact, this rule applies to all pronouns, even pronouns that are not reflexive (that are used to substitute the direct object in any given sentence), like lo, la, los, las, and te:

Como sandía / La como
I eat watermelon / I eat it

Coincidentally, comer (as well as other "ingestion verbs") is an excellent example of a verb that is transitive in nature but that is also used as a pronominal verb with reflexive pronouns. For example, it’s also correct to say voy a comérmela (I’m going to eat it).